Mobile Homestead is a permanent artwork by the late artist Mike Kelley, located on the grounds of the Museum of Contemporary Art Detroit. The sculpture is a full-scale replica of the 1950’s ranch-style home where Kelley was raised. It is the only work of public art ever made by Kelley and the first major installation of his work in his hometown.

In accordance with Kelley’s wishes, the ground floor rooms of the home are used as a community gallery and gathering space featuring exhibitions and programs created by and for a diverse public that reflect the cultural tastes and interests of the local community. The white clapboard facade and front room of the home are designed to detach from the rest of the structure and travel as a trailer into communities throughout Detroit on missions in service of the public good. In contrast to its public side, the Mobile Homestead has a private side – a series of underground tunnels and rooms forty feet below the home. Kelley specified that this subterranean area is to be off-limits to the public and “reserved for secret rites of an antisocial nature”.

According to Kelley: “Mobile Homestead covertly makes a distinction between public art and private art, between the notions that art functions for the social good and that art addresses personal desires and concerns. Mobile Homestead does both: it is simultaneously geared toward community service and anti-social private sub-cultural activities. It has a public side and a secret side…”

Rather than projecting ideas out into the world, the Mobile Homestead invites the community to contribute ideas. Visitors to the house are encouraged to suggest programs, projects, and exhibitions. If you’re interested in learning more or getting involved with Mike Kelley’s Mobile Homestead, stop by or drop us a note at: mobilehomestead@mocadetroit.org.

Please note that Mike Kelley’s Mobile Homestead is currently closed for maintenance and will re-open with the next exhibition.

Accessibility
All of the Mobile Homestead‘s entrances and public areas are wheelchair accessible.

The Mobile Homestead was born from ideas that Mike Kelly (b. Detroit, 1954, d. Los Angeles, 2012) developed over a lengthy span of time. Though based in Los Angeles, Kelley’s birthplace of Detroit has always been a locus of his practice. In 1995, he realized Educational Complex – a model of the schools he attended and the house where he grew up created from memory. For Kelley, this work marks the beginning of a series of projects involving memory, autobiography, and the reinterpretation of previous pieces.

For years, Kelley entertained the idea of buying the home where he spent his childhood located on Palmer Road in Westland, a suburban neighborhood that primarily housed workers for the Big Three automakers: Ford, Chrysler, and General Motors. When the current owner refused to sell, Kelley decided to produce a facsimile of the house on wheels. In collaboration with MOCAD and Artangel, the first phase of the Mobile Homestead project was completed in 2010.

Mike Kelley’s Mobile Homestead made its maiden voyage from the grounds of MOCAD in Detroit to the ‘mothership’, his original home in the suburbs.

On its way down Michigan Avenue, one of Detroit’s main arteries and passageway to the western suburbs, the Mobile Homestead passed through some of the city’s most historic neighborhoods such as the old Irish area of Corktown; Dearborn, the home of the Ford motor company, the Henry Ford Museum and Greenfield Village (Ford’s personal collection of homes and structures associated with great Americans such as Thomas Edison, the Wright Brothers, and Rosa Parks); Inkster; Wayne (where Kelley attended Catholic school); and finally Westland where the former Kelley family home still stands. Symbolically, the return trip reverses the ‘white flight’ of the 1960s when the decline of the automobile industry and increasing racial tensions caused an exodus of the middle-class from the city to the surrounding suburbs.

Kelley filmed the entire round-trip voyage, making stops along the way resulting in a video trilogy that was screened at the Whitney Biennial in the fall of 2012. Entitled Mobile Homestead Christening Ceremony and Launch, September 25, 2010, ; Going West on Michigan Avenue from Downtown Detroit to Westland; and Going East on Michigan Avenue from Westland to Downtown Detroit, the documentary-style videos chronicle the ordinary lives and communities of people who live and work along Michigan Avenue, capturing a moment when the city is questioning its post-industrial prospects.

Since its completion, the Mobile Homestead has hosted countless exhibitions and public programs planned by and for the local community, as Kelley intended. It serves as a regular meeting place for a broad range of groups, and the mobile portion continues to travel off-site to communities throughout Detroit on missions in support of the public good.

An audio interview with Mike Kelley and Artangel director James Lingwood can be found here. 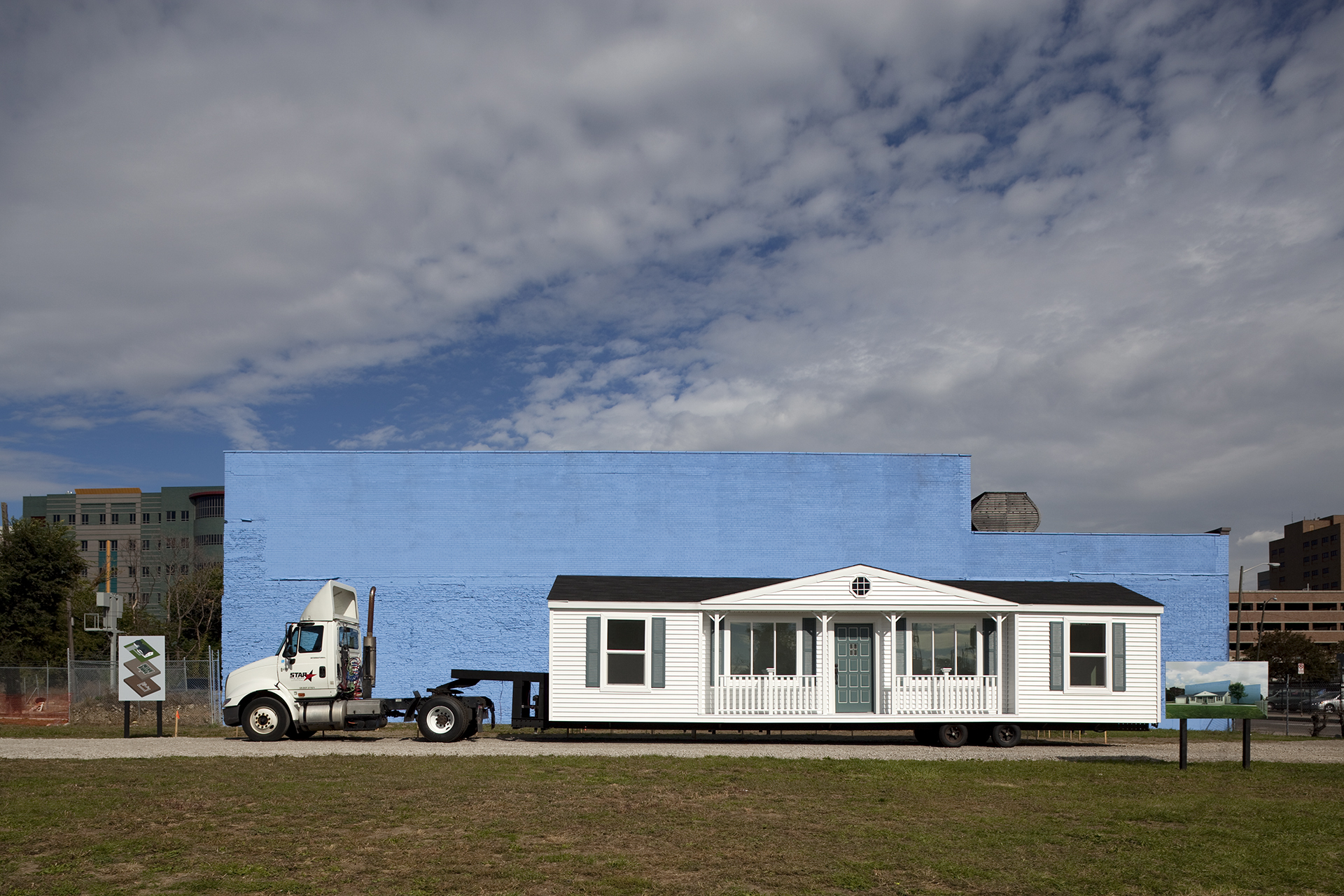 “He had a conflicted relationship with his hometown, as many people do and he became really interested in producing a displaced version of the house he grew up in. And then in the idea of it being displaced to the city itself.”
James Lingwood, Artangel’s co-director. 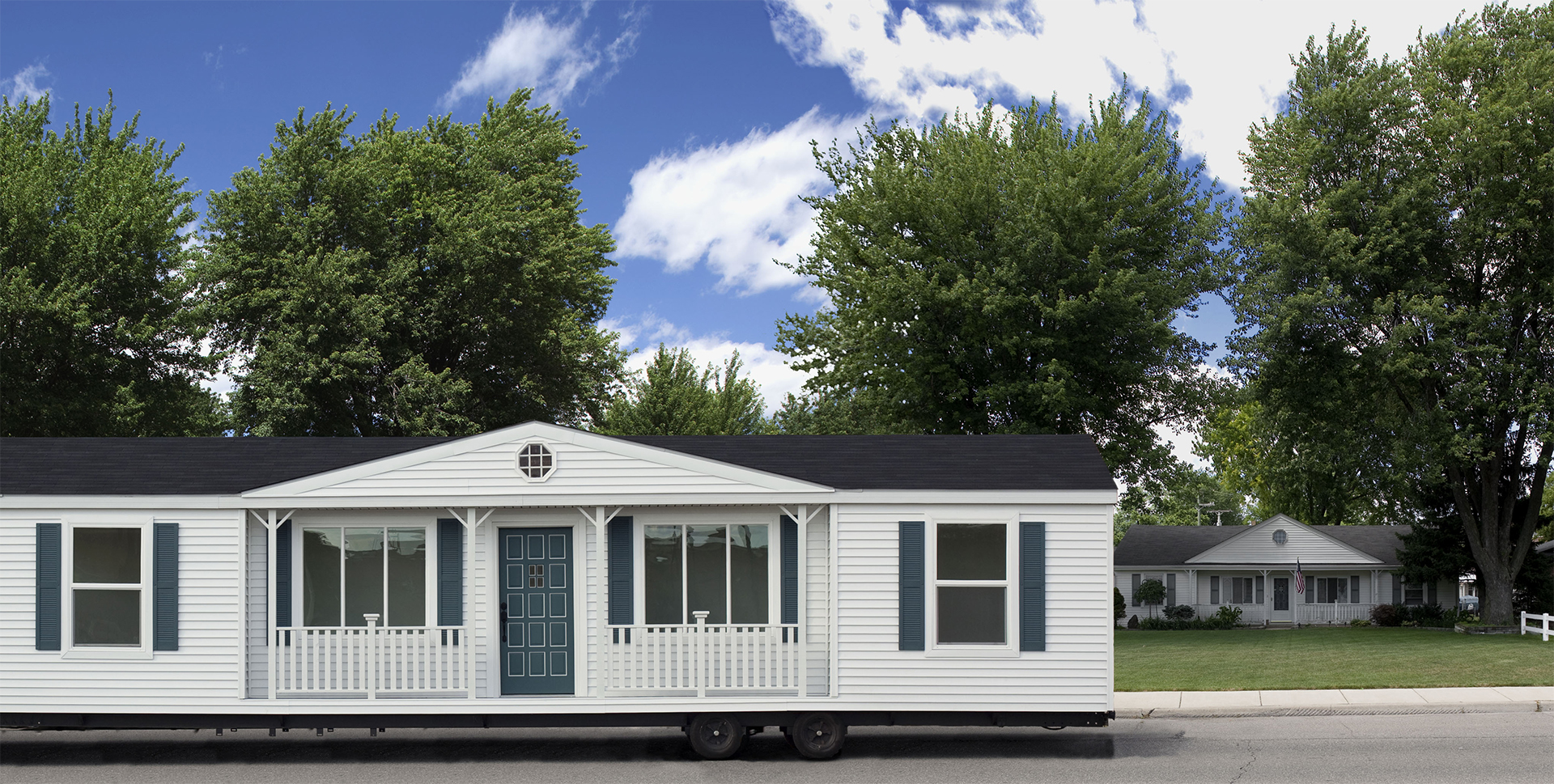 The Mobile Homestead in front of the original Kelly home on Palmer Road in Westland, Michigan, 2010, Photo: MOCAD 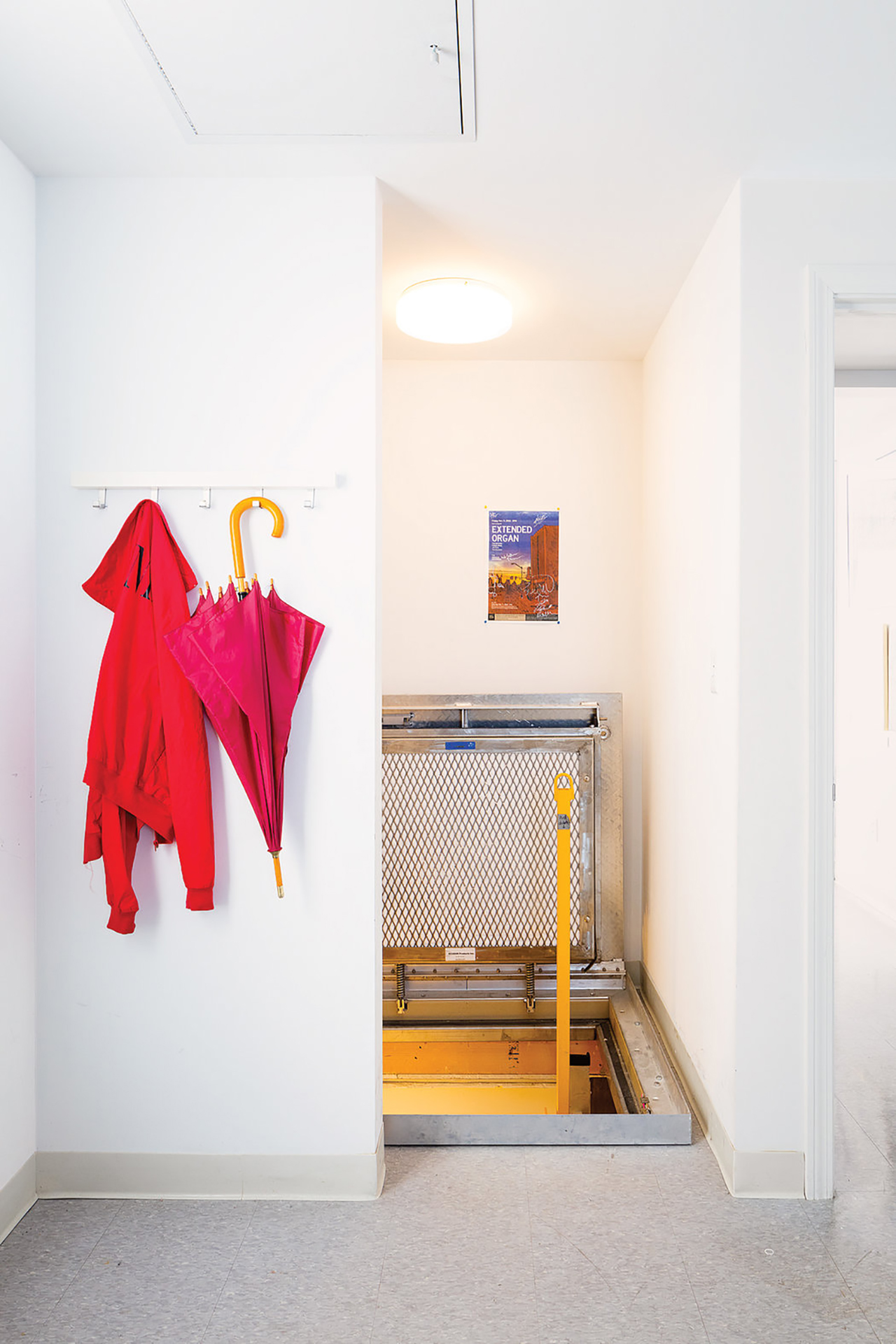 Hatch inside of the Mobile Homestead leading to the subterranean tunnels, 2017, Photo: MOCAD

“No other film in the Whitney Biennial had the complexity and gravity of Kelley’s Mobile Homestead movies … They are a study of depression economics and of a nearly stereotypical midwestern resilience in the face of loss. They are also landscape, cityscape, and skyscape movies, amazing to behold.”
Amy Taubin, Artforum, 2012 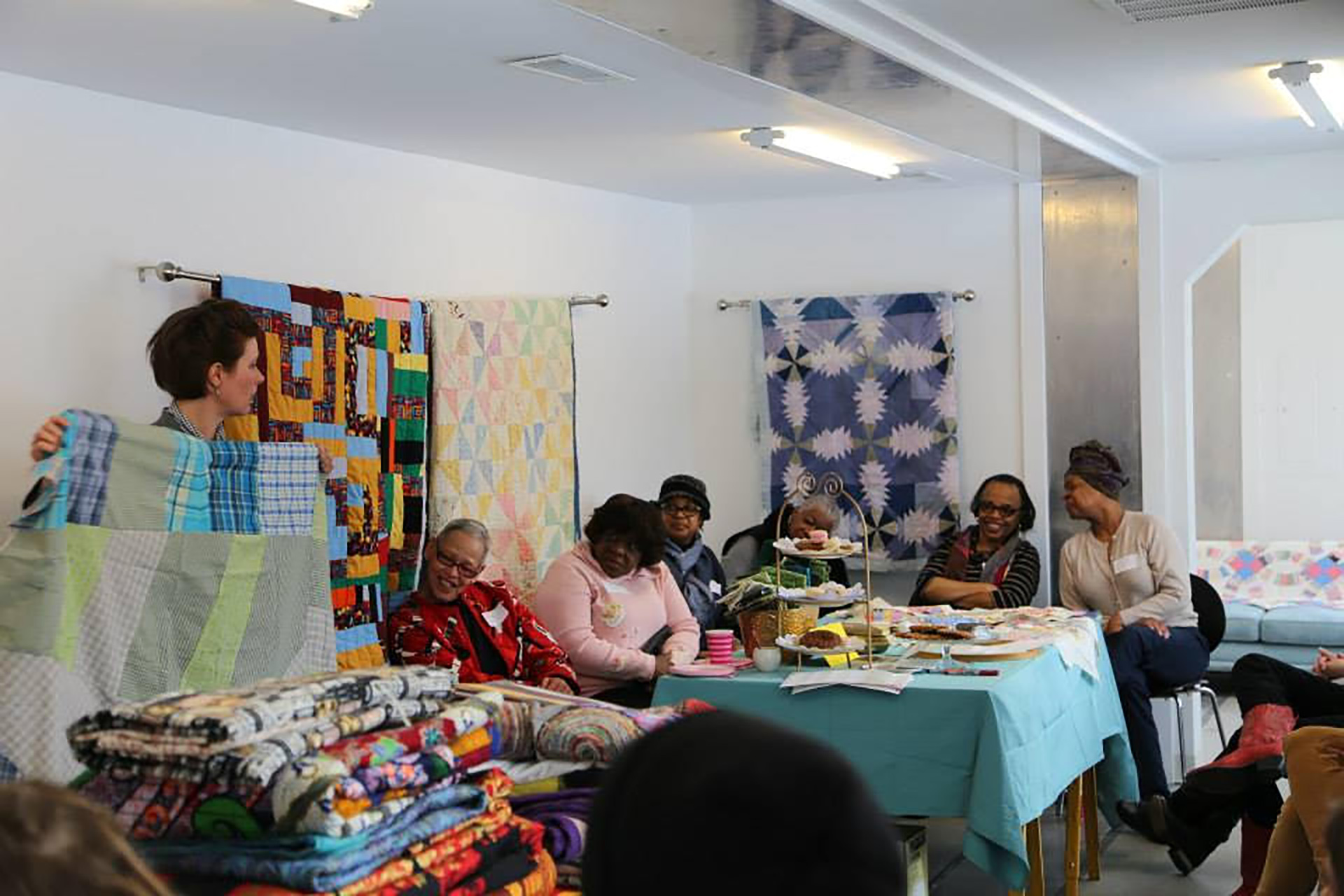 Quilting Bee program inside of the Mobile Homestead, 2014, Photo: MOCAD

“The world mostly comprises hidden lives, people who work hard, then pass away without notice. More often than not, people don’t get their white picket fence or their secret lair. That Kelley recognized the importance of what George Eliot called “unhistoric acts,” that he knew there was a world outside of celebrity and wealth and museum retrospectives and that it was big and interesting even if it went largely unmentioned, made him the kind of artist who comes around maybe once in a generation”
M.H. Miller, Observer, 2012 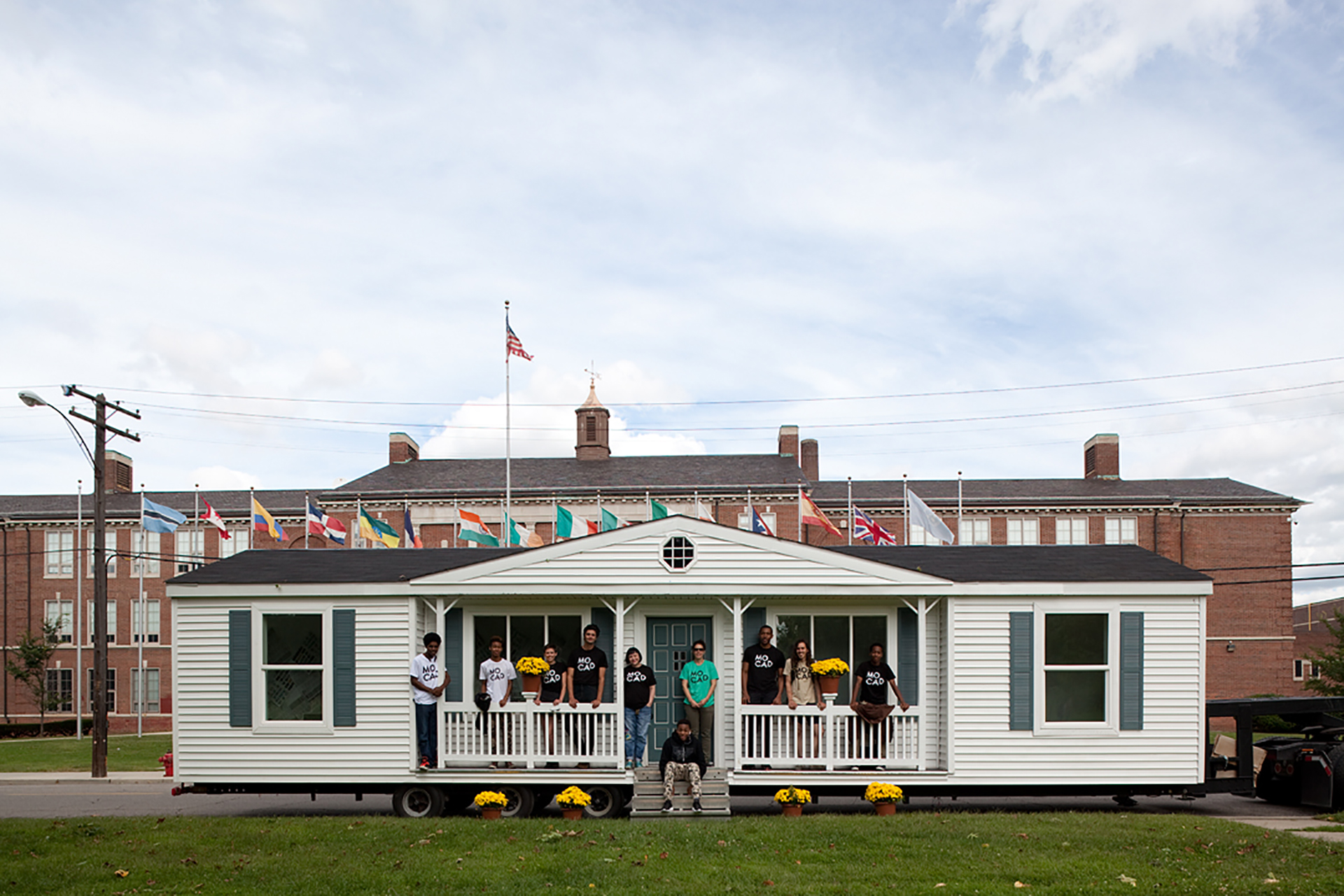 Mobile Homestead on a mission in support of literacy, 2014, Photo: MOCAD 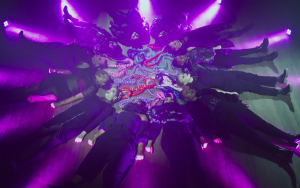 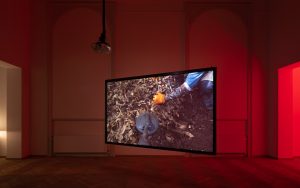 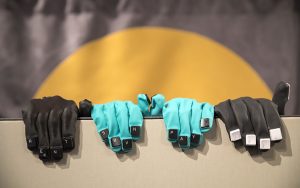 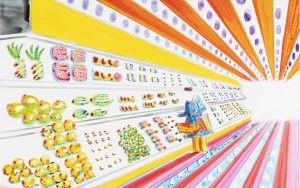 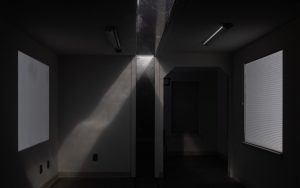